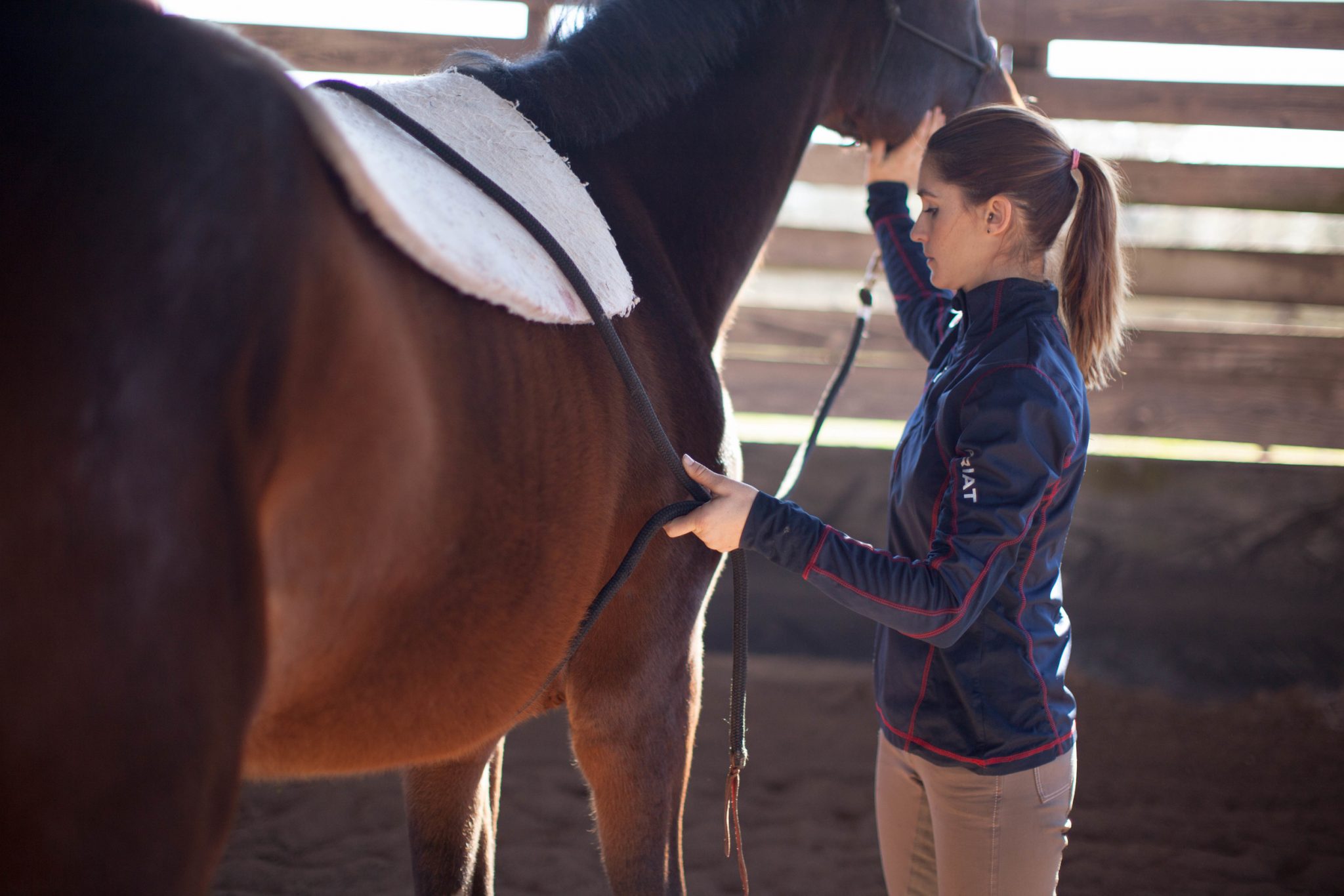 “Lana:  (Remember the screen star Lana Turner?)  Lana is another Stiletto “Pg” daughter, (out of Lily Creek My Secret) outstanding in movement and out of a mare that combined TB and a top Trakehner stallion line, Lafayette. Lafayette sold for very high dollars out of stallion approvals in Germany to  Russian buyers, one of the best movers, but seems to have been lost to the stars, as he has not appeared in competition.  Still, his sire was the very good producer, E.H Sixtus who was sired by Habicht, Martini’s *Pg E* grandfather. Just outstanding movement in this line all around. Lana is a tall, leggy mare, not sure when she will stop growing but has been an eye catcher with her movement, so I’m thinking dressage all the way.
Since the line is new to me on the Dam’s side, but one that impressed me enough to buy, I bred her to my most reliable sire line, Stiletto, who is probably the most clear minded horse of my lifetime, capable in all sports. Lana needed time to grow and mature,  but time is right now and she has met a trainer who will develop her confidence and appreciate her sensitivity”.

As I have mentioned in previous updates, I am introducing all of the babies to several new things this week. My hope is to develop confident athletes who are prepared for anything and able to think their way through new and sometimes scary situations.

1) The spray bottle: I have one filled with water and have been practicing the horse’s confidently accepting being sprayed each day.

2) The flag: This is simply a plastic bag tied to the end of my stick. Gaining the horse’s acceptance of this will not only subdue everyone’s fear of the dreaded plastic bag floating in the wind, but also build the horse’s trust in the hands that hold it.

3) Clippers: I have a hand held massager that I found at CVS. This little pack is easy to hold and creates the perfect simulation for clipping. As I bring the horses in each day this has become part of our grooming routine; focusing on the ears, chin and behind the poll. These are the places people often get stuck and even end up having to twitch or sedate horses to reach.

All of these items fall under the umbrella of the friendly game. They are all intended to build the horse’s confidence and prepare them for their futures.

Although I have been listing the horse’s updates in “days” they would be more truly represented as “sessions”. Each horse is alternated and played with every other day.

Day 6: I took Lana to the outdoor arena for the first time. To get her settles we started off with the touch it game. Then I moved into reviewing our seven games. I began with the friendly game of course by introducing Lana to the “flag”. Lana was by far the most reactive to the bag. However she was by far the quickest to come around.

This is the beautiful thing about Right Brain horses! Because they are naturally insecure they are desperately searching for a leader. Once you can earn the trust and confidence of a RB horse the sky is the limit. We found a good spot to end but I wanted to plant one more seed before ending the session. So, we went into the round-pen and I used the lead rope around the saddle plan as a simulation prep for the cinch. Although she has been accepting the saddle pad and myself I know that the feeling of the cinch for the first time can be unsettling. I was very happy I did this because her initial reaction was to move away and become agitated. I used the strategy of approach and retreat (with the tension on the lead rope) and built her tolerance of having the rope snug around her barrel.

Day 7: Went to the outdoor again and revisited the flag and added the fly-spray. She got a bit tense when I brought the flag out again but did not move her feet. For an extrovert this was a huge improvement. Now, I will just need to continue peeling off the layers of tension until she has fully accepted these things.

After this we went to the round pen and reviewed our cinch simulation. She was a champ! Because of this I decided to add the saddle. She stood very still as I saddle her but I could tell she was tight from her eye. When I sent her out she wanted to go Right Brain and bronc much like Lamark. I addressed it the same by sending her forward till she was freely forward. She did her changes of direction towards me perfectly.

Once she had found her freedom in moving forward (not up) I allowed her to come to the middle and rest with me for a long while.

We went in the covered arena and played with our zone 3 driving, squeeze game and sideways games. Then, I upped the anti on our circling game by asking for a downward transition from trot to walk on the circle. This caused her to become VERY emotional. Another sign of her innate character. Slowing down causes her stress (extrovert) where speeding up causes stress to a horse like Dashing (Introvert).

We ended on a good note however she had managed to build up a good sweat. This allowed us the opportunity to play squeeze/friendly game with the wash-rack afterwards for a bath. Although there were extensive breaks in between tasks this ended up being a very LONG session!

Day 8: Lana has become inconsistent with the change of direction at liberty so I put her back on-line in the round-pen and played on-line as if I were at liberty. I always try to remember “don’t let them be wrong too long or they will begin to think they are right”. As a RBE moving forward with consistency of a pattern was going to be our best strategy. It look about four figure 8 patterns before Lana’s first thought was to turn towards me as I backed up and did a beautiful change of direction both ways. I brought her in right away and relished in her blowing out and lick & chews.

I stayed on her for a while as she soaked on the session.

Day 9: Saddled for the second time. Although she still humped a bit she was much more present and left brain about the whole situation. She stayed connected to me and soft in her eye. This is where I can really see her extroverted tendencies. Initially I ask them to walk trot and canter each way and do a change of direction towards me maintaining gait. As long as they find rhythm and relaxation within that carrying the saddle I am happy. Lana achieved this right away. However, every time I brought her in (at liberty) she would only stay grounded for a millisecond before leaving again. My initial thought was to keep stopping her. However, I know that Extroverts HAVE to move their feet. So I just encouraged her every time she decided to move off again. We continued this until SHE asked me if she could come in. I said yes, of course, what a wonderful idea, and she had a good soak session with me in the center of the round pen.

Day 10: The round pen was very wet so I didn’t feel comfortable moving the horses around in there. We took the opportunity to be flexible and worked on the 22’ line in the outdoor arena. At first Lana was a little tight but she came down very quickly. I used the touch it game to build her confidence when we initially entered. Then, went through our seven games. She was feeling great on the circling game so we revisited the downward transitions from trot to walk. I kid you not she was spot on! It was like she had taken notes since our last session on this topic. After completing a few each direction It was all GOOD GIRL and move on! On the way back to the barn I was inspired to end the session with at least a little time on her back. We played with mounting from both sides at the wooden mounting block. This is a stationary block that resides just outside the indoor arena. She walked up perfect for me on both sides and stood quietly for me to mount. I AM SO HAPPY WITH THIS SESSION! Short sweet and successful.

Below you can see a video of the “Touch It” game. This video as taken during week one, however I thought you may still enjoy seeing it. Now that Jerome and I are more settled/unpacked I am hoping we can bring you more regular and current videos!