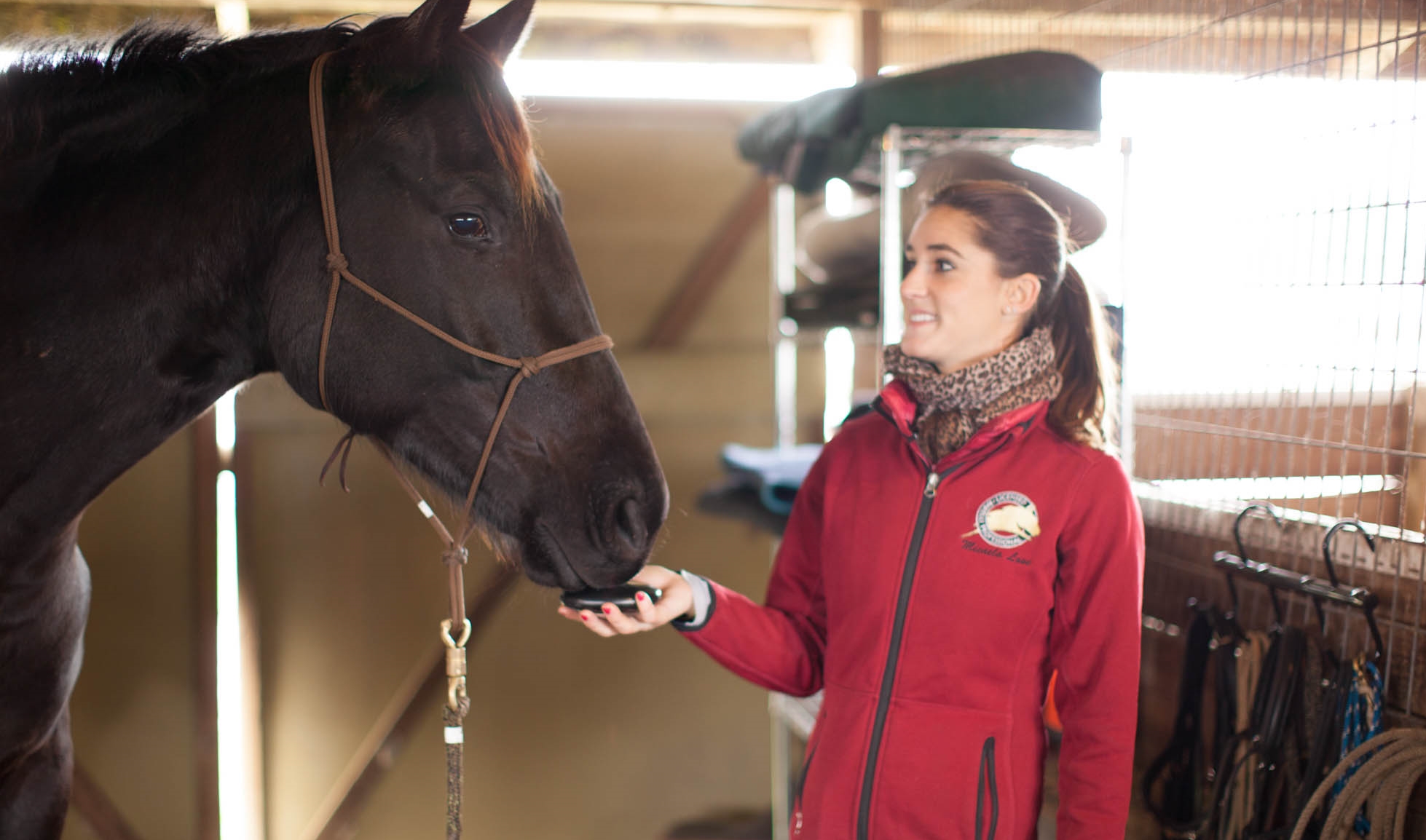 As an introduction, Micaela and I thought it would be fun to include my breeding thoughts and goals to combine breeding and training.  With that in mind, I introduce Dashing.

Dashing is the product of a Hanoverian mare by Donnerhall and Imminence, a stallion I bred, by Beaujolais out of a Martini Pg*E* daughter.  I chose “Immy” as the sire because he had the qualities the mare lacked, better conformation in the top-line, hip angles, more lift and spring in the trot.  They both had great necks, set well and good power from the quarters, one of the most important goals for a dressage horse. The combination was all I could have hoped for with DaBella, the first born and then Dashing, the second cross of these two. I’ve been slowly introducing new mare lines as my own mares were carefully bred and selected to produce very amateur friendly competition horses, but were aging out of their breeding time.  However, riders have improved greatly in my 40+ years of breeding so I also have allowed “more” in the breeding, perhaps a bit more challenging (sensitive) in some areas but with the ability to be very competitive in this always growing and changing sport of dressage. While classic principles remain the same, warmbloods have evolved in gaits and quality.  Still, the mind is always my first selection and Dashing will have the nerves and gaits to be a highly competitive dressage star, particularly with the wonderful training of Micaela who will train to match his “horsenality”, a word I’ve grown to love.

As Jean mentioned, her horses are bred to be ideal for the amateur rider. For me, this not only means offering an exceptionally bred horse, but also a horse with exceptional ground manners and the ability to deal with just about anything. This week I have been introducing all of the four babies to a compilation of things.

1) The spray bottle. I have one filled with water and have been practicing the horse’s confidently accepting being sprayed each day.

2) The “flag”. This is simply a plastic bag tied to the end of my stick. Gaining the horse’s acceptance of this will not only subdue everyone’s fear of the dreaded plastic bag floating in the wind, but also build the horse’s trust in the hands that hold it.

3) Clippers. I have a hand held massage that I found at CVS. This little pack is easy to hold and creates the perfect simulation for clipping. As I bring the horses in each day this has become part of our grooming routine. I am particularly focused on the ears, chin and behind the poll. The places people often get stuck and even end up having to twitch or sedate horses to reach.

All of these items fall under the umbrella of the friendly game! All are intended to build the horse’s confidence and prepare them for their futures.

Day 6: So far, Dashing has done well with all three! The plastic bag was the only one to get him upset. However, by the third session he realized that the bag was harmless and as long as I (his leader) was calm he could be calm as well.

We continued with the friendly game theme and worked with the saddle pad some more. Then, I was able to mount him bare-back and review our lateral flexion, disengagement, leading rein start. We also added following the rail at the walk with a change of direction through the middle of the round pen.

Day 7: After our grooming session we ventured to the outdoor arena for the first time. I began playing friendly game with the spray bottle and flag. Then, Zone 3 driving with the touch it game on all of the dressage letters surrounding the rail. Once he had put his nose on all the letters we went to the center of the arena and revisited our Principle Games. When we got to the circling game he became very emotional.

Although it took some time, Dashing eventually came down and was able to walk a circle each direction. This was a huge shift from where we started so I let him soak on that and we called it a day.

Day 8: I feel like Dashing is STILL not truly accepting me as his leader. What gives me this feeling is that he is always on guard and never appears truly settled in his own skin. He will often flinch when I make movements or begin to approach him.

Today I took him into the outdoor arena again with the intention of just handing out and having what Pat and Linda call “undemanding time”. Luckily another person at the barn was around and in need of a chat. We just stood there, for a good 45 minutes, and talked. We became intentionally obnoxious with out hands as we chatted and would walk away and back towards Dashing until he became relaxed and ignored our expressive gestures.

Day 9: I have been doing a lot of thinking at night about this one… I have the feeling that maybe I am getting suckered into “tip-toeing” around this horse. He is the kind that will cause you to do that because he is so light and sensitive which is a huge strength! However, maybe by being so soft I am keeping him from building his emotional fitness?

This morning when I went out my intention was to be, well, obnoxious. Like when you see Pat imitate a drunk person walking towards the horse to desensitized them. I was like that with EVERYTHING! The flag on the end of the stick. Myself approaching, retreating and re-approaching. Swinging the lead rope all over, the saddle pad, and so on. Of course within this I was still using my feel and retreating when I hit a threshold, releasing when he gave me the response I wanted. In the end I laid over him from both sides, forked over and worked on maintaining gait and direction at the walk with one rein. He was super! I feel like he finally ACCEPTED me on his back instead of just tolerating me. Not sure if this is the full breakthrough moment or not but will keep you posted

Day 10: Was obnoxious again and he became settled even quicker. How interesting…?! I mounted him again and did the usual review. No new things added. I am feeling like he is getting ready for the saddle!