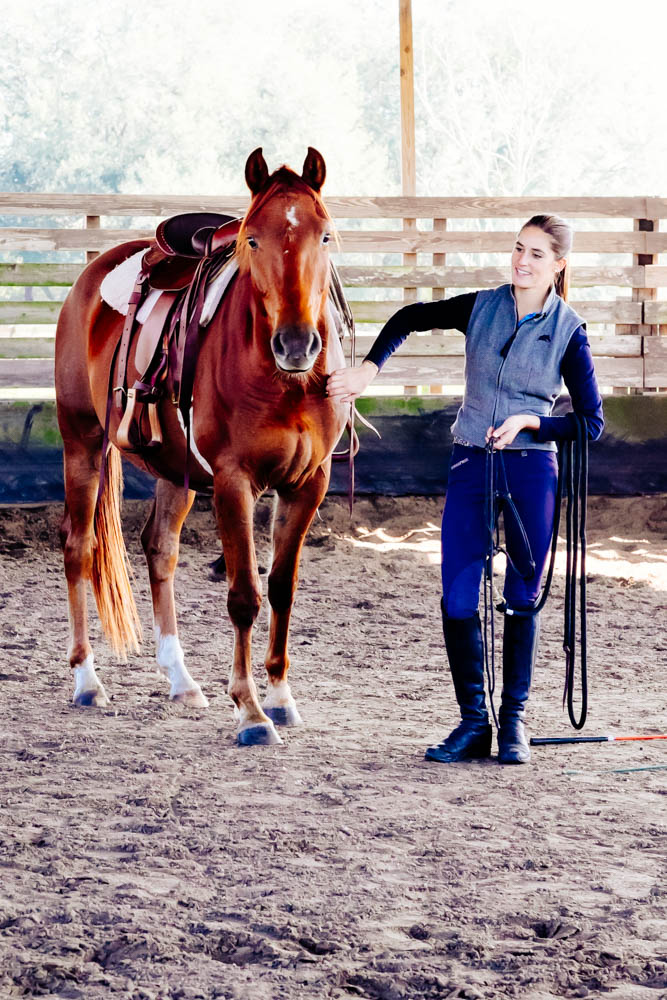 By MichaelaJanuary 25, 2016General, The Salt Block6 min read
No Comments

I was really happy with the progress we made and feel like I was the one who learned a ton this week.  Lamarck, and all of the babies continue to challenge me and cause me to revisit or dust off things I KNOW, but maybe haven’t had to apply in my horsemanship for awhile. When I was studying with Linda and hit a road-block in my horsemanship she would always say

This was not intended to be demeaning or negative. Actually Linda would always say it in the most positive way. Like, “yippee! Now you have an opportunity to learn even more”!

Through my sessions with Lamarck I am happy to report that I have not become frustrated. Although I have approached the brink of it at times. I have been one step ahead and realized that maybe I need to learn something new or think outside of the box in order to achieve what I’m after. It is really fun to get to this point and be able to have such a positive perspective on learning (for both me and the horse) without getting so deep that I cant see the forest through the trees.

Please note that I am still taking all of the babies into my cross tie area for grooming and prep with the clippers. For now, I am still saddling all but Filigree in the round-pen. I just wanted to reiterate that as I am not mentioning it in each day’s overview.

DAY 11: I saddled Lamarck fairly quickly after reviewed the games in the round pen and then went to the indoor arena to warm up on-line. When I stepped away after saddling him I could feel that he was waiting for me to take off the halter so that he could run around. This has been my pattern to make sure that they are accepting the cinch and thinking forward instead of up. Lamarck has had zero gooses in him since the first saddling so I felt it was a good time to interrupt the pattern and make sure I wasn’t teaching him to make an assumption. Instead of turning him loose I did a couple things very slow and soft in the round pen. Then, I took him to the indoor for a session on the 45’ line! I put a cavaletti perpendicular to the rail and used that as part of our squeeze game. He was very brave with this and maintained gait and direction at the walk and trot each direction without getting emotional.

It was really fun to see him test me and then realize that I could still be effective from so much further away. I think this is really going to help bring up both the rapport and respect in our relationship.

Once Lamarck was calm, connected and responsive we went back to the round pen and revisited our riding.

*Walked both direction with a change of direction through the center

*Emergency one rein stop (from both sides)

We then worked on picking up the trot and maintaining the trot. I wanted to keep it really simple and only focus on his responsibility to maintain gait. Nothing else. He continued to make the circle smaller and smaller till he broke gait back to walk. In the end, I lost my focus and was not satisfied with how we ended the session.

DAY 12:  I have been on vacation for four days over Christmas and have had lots of time to think about how to progress. I remembered being in a clinic years ago and having the instructor tell me. “Your circling game is only as good as your send”. This challenged me to think about improving my trot transition (send) in hopes that would increase his ability to maintain gait. The majority of our warm up on-line was geared towards this. We started with zone 3 driving then went onto the circling game till the trot transition was super snappy on the ground.

Lets, just say, it was a super ride and Lamarck was very responsive in the transitions and maintained gait like the energizer bunny.🙂

DAY 13: Today Lamarck and I joined Maria and Dashing for an outing across the road. Valhalla has a mini playground across the road with some hills, and various sizes of logs to work the horses over. I saddled Lamarck right off the bat in the round pen and he was SUPER. Didn’t even flinch. I then joined Maria and began our trek. Both of the boys were very brave as we crossed the threshold of the barn. There was one point where both of the boys got a little tight, simply stopped and raised their heads in typical prey animal fashion. Once they had settled we continued on and entered the large playground. Similar to our initial introduction of the arena, we allowed both the boys to explore the new environment until they were confident and in a learning frame of mind. We then went through our seven games and were able to incorporate the hills and logs to spice things up. Lamarck remained calm, connected and responsive the entire time and truly exceeded my expectations.

It is my plan to do this semi-regularly with all four babies both on the ground and riding, once we are a bit further along.

DAY 14: I saddled Lamarck right off the bat again in the round pen. I am happy that we can now get saddled and get to playing without having to make a big fuss of him moving around first.. Once we went through our games I turned him loose and worked on transitions and change of direction at liberty. I am also beginning to be more particular about his canter leads. Lamarck is not balanced yet and often picks up the outside lead or crossfires behind. I am trying to help him understand this more by making sure that I don’t release unless he is on the correct lead.

Mounted and went to business. It was my hope to revisit his ability to maintain the trot and also develop a better canter transition. The trot work was super and he was able to change direction through the center without breaking gait. However, when we got to the canter we got sticky again. After a series of smile, squeeze, smooch, spank and Lamarck bucking I called on someone to enter the round pen and support us from the ground. As much I need to conquer this from the saddle I do not want to develop a negative pattern. Which is the direction I felt It was going. With support from the ground we were able to get a snappy canter transition each direction. We ended on this note. I’ll be licking and chewing on how I could better prepare him so that we can work through this without a ground person.

DAY 15: After a good think last night I remembered about hearing Pat talk about “tightening the spring” on the ground before a ride. This was to achieve more snappy responses once up in the saddle. So, I really tightened the spring on the ground by being way more provocative and throwing transition after transition and not releasing till I had a “yes mam I’m forward” canter transition. Once this was the case I mounted him and basically went straight to the trot then canter. I didn’t want to loose the momentum I had just built on the ground. Lamarck was perfect each direction with no thoughts of bucking. I was maybe on him for 2-3 minutes. He gave me the exact step up I was looking for so I got off and took the rest of our time to build some rapport with a hand graze walk around the property.

P.S. New photo and video of Lamarck next week! My camera man got snowed into a hotel in Maryland and has been indisposed for the past three days.