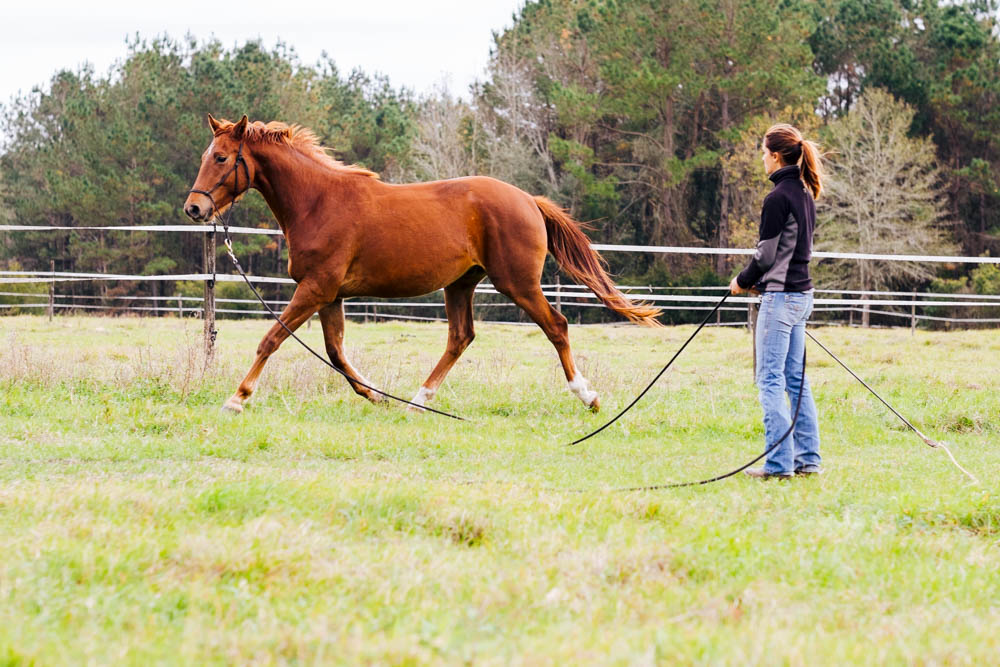 Like Dashing, Lamarck was another I got to meet and work with during my September visit. Apparently he was very good at being naughty and was causing a lot of grief for the working students. Specifically by being choosy of who could touch and halter him.

Luckily another Parelli Instructor and dear friend of mine, was able to come before me and not only got him better with haltering but was also the first to crawl up and over the little guy. During my visit I was able to reinforce some of the work that was done and became very excited about future sessions with this character.

Since my arrival I have had a lot of fun with Lamarck! He is the kind of horse that, if you understand his naughty side, you will gain so much appreciation for the level of interaction offered and desired. He has been a quick study and possesses a wonderful combination of self-confidence and sensitivity.

Below you can follow my daily journal of his progress. Although my strategies vary with each horse, my basic sequence and “skeleton” is the same. You will see many similarities and repeat session from Dashing’s profile.

Day 1:  Re-Introduced myself and my tools to him by playing the first three games. You can learn about Parelli’s Seven Games by clicking HERE.

Once I felt that we had reached a good place I took him for a walk around the indoor arena. It was my intention to have the arena be a release and therefore I did not ask anything of him in there. I simply shadowed him as he explored and put his nose on everything.

Once the horse’s are going under saddle It is my hope to get out of the round-pen ASAP. So, I am creating lots of time for each baby to become calm, confident and ultimately focused in the indoor arena.

Day 2: Today we worked on Lateral flexion and backing from zone 3 (where the saddle will go) on the ground. By doing this, I am building his understanding of how to yield to steady pressure from the rope (which will soon be my rein). Ground driving from zone 3 will offer the same bridge for my seat in the saddle as he learns to make upward and downward transitions off of my energy.

Once both of these tasks were understood we went to the covered arena and reviewed the first three games, lateral flexion, backing and transitions from zone 3. This time, I was in the lead as we wondered around and made suggestions of which things he should investigate and touch with his nose.

Like most left-brain horses, Lamarck was reluctant to back away from me (drive from the yo-yo game). For a horse, backing away means relinquishing the dominant position. In the herd, the rules of engagement are, “he who moves his feet first looses”. For this reason, it solidified my instinct that Lamarck was innately a Left Brain horse.

Once we finished games 4-5 I felt that he was calm, connected and responsive. After some time to soak I introduced him to the saddle pad and did some approach and retreat with it. Allowing him to follow it at first, then throwing it up and over from each side. It was not long before he was trying to eat the pad, showing me his gained confidence. I took the green light and laid over him myself. He felt very confident with this stage. So, I forked my legs over and practiced our Lateral flexion on each side. After he gave me some good lick and chews I slid off and hand grazed him for our grand finale.

Soak Time= Like humans,  horse’s need time to process in order to retain new information. When we are teaching them new things it is important to build in moments where there in zero pressure on them. This will allow them to feel safe and process/absorb the information we are offering. In each session I look for the horse to be blinking, and also “licking and chewing” as signs that he is staying in a learning frame of mind.

Day 4: Began with review of previous sessions. When we got to the zone 3 driving he started to test me and even kicked out at my stick when asking him to maintain gait at the trot. I took this as an indicator that he was ready for me to become more, what Linda calls, “friendly bossy” with him. This means an increased expectations of responsiveness while remaining friendly and supportive for the horse. He worked through this rebellious stage fairly quickly and we went for our first session at liberty.

The round pen is  large, maybe 80 feet which is great! We were able to successfully maintain one lap of trot each direction. I felt this was a great introduction so we called it a day. My favorite part was how quickly he gave me two eyes and drew into me at the end.

Day 5: As the horses become ready to accept the saddle I have been incorporating more work at liberty. When saddling the horse for the first time it is ideal that they be able to move freely without restriction from a halter/lead/human. Have the saddle can be claustrophobic enough for them without adding other restrictions.

In order to prepare them for this event I have been working hard to build in a “bring back”. For me is looking at the hip and breathing out (and or saying “good boy/girl”. Also, it is important for me that the horses understand how to make inside turns! Often people use outside turns to push the horse away from them for changing directions. This is not my preferred method and I rarely use outside turns.

1) I personally don’t like my horses thinking it is a good idea to push their hindquarters in towards me. Also, this maneuver is reinforcing their prey animal instincts to turn and run away from predators (the human standing in the middle).

2) I want to keep a consistent connection with my horse. By teaching the horse to turn in towards me we can keep an open line of communication through each turn. Not only is this safer for both horse and human, it also builds towards flying lead changes at liberty!

With that said, this was Lamarck’s second day of playing with changing directions at liberty to the inside. Like most he is a bit one sided, and found changing from the left to right much more challenging. There could be endless reasons for this, but the most common is that horses get much less handing out of their right eye and are therefor less confident putting humans on that side. We are so programmed to halter, lead, saddle, bridling, mount, dismount from the left side that we can be the ones to blame for this imbalance.

On the second try Lamarck gave me a REALLY good try! Although he broke gait from trot to walk through the change of direction, he never once thought about ducking to the outside. I felt this was the perfect time to stop and rewarded him with scratches and a cookie:)

Jerome caught this session on video. Stay tuned for a short video on Lamarck working through his understanding of the inside turn!