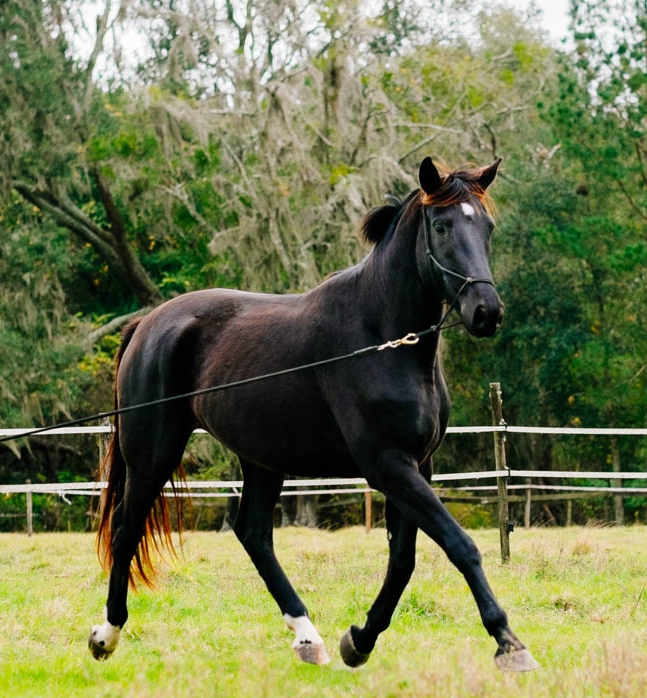 When I came for my interview back in September Dashing was the first to catch my eye. He is of course D*A*S*H*I*N*G in every sense of the word! Although he is the most developed and impressive three year old (in my opinion) he is also the most reserved and unconfident. To put it simply he is a scardy-cat in the hunk of a horse’s body.

Like all of the horses here, Dashing has had lots of handling, love and care throughout his life. With that said, I still do not feel that he has truly accepted humans as his partner and provider. It is my first priority to build Dashing’s confidence in himself as well as me as his leader. Through passive persistence and PATIENCE I know we will get there. As a Right Brain Introvert, Dashing needs me to “be gentle with him” and offer consistent and clear leadership each and everyday.

Below you will find my daily journaling of Dashing’s progress:) Day 1: I played to WIN the first three of Parelli’s Seven Games

Once there was understanding on the first three games I decided to put them to purpose with an exercise we call the “Falling Leaf Pattern” in the covered arena. Dashing was so incredibly light that I literally felt like I was a soft breeze blowing him through the arena. I was really happy with his responsiveness and how curious he became by touching the letters, mirrors and objects in the arena.

Day 2: Although I am not in a hurry, it is my goal to have Dashing going confidently under saddle. So, every day the games and tasks I present are to prepare him for that.

Today we worked on lateral flexion and backing from zone 3 (where the saddle sits) on the ground. By doing this, I am building understanding of how to yield to steady pressure from the rope (which will be my rein pretty soon). Ground driving from zone 3 will offer the same bridge for my seat in the saddle as he learns to make upward and downward transitions from my energy and intention.

Once both of these requests were understood we went into the covered arena and reviewed the first three games, the falling leaf pattern and now lateral flexion, backing and transitions from zone 3.

Day 3: Began with review, then an introduction of games 4 & 5

I felt that he was calm, connected and responsive so we went back to the round pen where I began working towards him accepting a human on his back. Because of his size I am unable to mount him from the ground. So, we played friendly game with the mounting block. In the end I was able to lay over him and slide off from each side, throw the rope over his head, fork my legs over and do lateral flexion from his back on each side.

Day 4: Started in the covered arena on the 22’ line. After review everything from previous days I Introduced games 6 & 7

He was super! So, I decided to begin teaching the canter transition on the circle. I like to use one cluck for trot and two clucks for canter. I was only worried about the canter TRANSITION, not how long he kept it. Once he picked up the canter I would soften my energy and bring him all the way back to me.

For Dashing, this is going to be a great way to build his emotional fitness! Because he is more introverted, the faster gaits can cause him to become emotional. So, by asking him to bring his life/energy/emotions up, then right back down, its like a friendly game with the canter. Approach, retreat and repeat.

Day 5: For our warm up we reviewed our previous lessons, then played with the canter transition in the round pen at liberty. It was much harder for him to understand the bring back/disengagement without me using the rope to support.

Every time I bring the horse in or want them to understand that its game over I say “good boy” or “good girl” as I shut down my own energy. This is something Linda was very consistent about with her horses and after seeing how beneficial it is to have that button I am excited to build it into these babies.

Once Dashing settled down from the canter transitions I introduced the saddle pad and played friendly game till he was confident with me throwing it up and over him from both sides.

Day 6: Dashing is becoming braver and more gregarious as I enter their field. He is no longer trailing behind Lamark to catch me but is now neck and neck as they come to my whistle.

With that said, he is still apprehensive when a new concept or object enters his reality. Today there were jumps set up in the arena which was perfect! We took the opportunity to practice our zone 3 driving and “touch it” game to build his confidence. Then, I played all seven games on the 22’line. I am very aware of the little aversions he makes by backing away from precieved pressure. He is like a stealthy black beauty that will ever so slowly back away without loosing eye contact as I re-coil my ropes or adjust my stick. There is zero pressure on him or intention oozing from me. However, the motion from the rope being drawn in is enough for him to feel he has to put space between himself and the moving object. This is not something to punish him for! It gives me feedback on where and how I need to continue building his confidence.

With that said I know I need to continue with the zone 3/4/& 5 driving to allow him to build his self-confidence as he approaches things on his own. Also, I realize that our draw is non-existent and he can be apprehensive about approaching me when I ask. So, we did lots of friendly game with the rope and stick going away from him so he could follow the scary object. Then, we went into the round pen and played a pseudo version of the catching game. He is very good at giving me two eyes, but his feet get stuck. I approached and retreated with this until he could accept my invitation to come, nose neck and feet, from greater distances. In the end, I was really happy with how much effort he put into catching me and we ended on a good note!

*You can learn more about Horsenality by purchasing a DVD through my web-shop. Click on STUDENTS, then PARELLI GEAR*