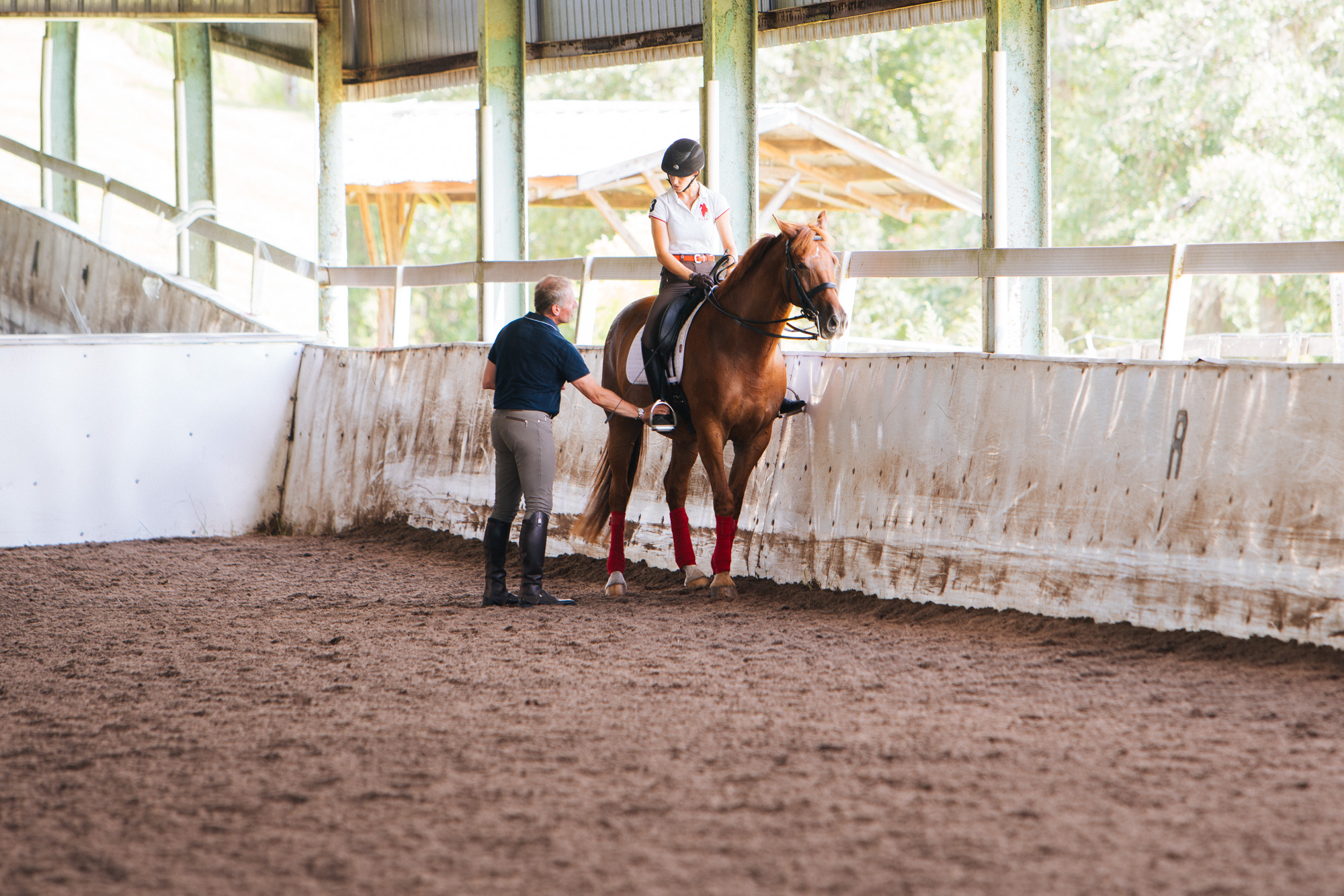 A Lesson with Herwig Radnetter

Home » A Lesson with Herwig Radnetter

Last week I was presented with one of those, “you better shake hands with opportunity or get slapped by it,” sorta situations.

For over a decade Valhalla Farm and Herwig Radnetter, of the Spanish Riding School, have been in cahoots. I never received the exact story of how the two came together, however, after a series of reminiscent stories it was reasoned that this distinguished teacher has been making his was across the Atlantic for the past sixteen years!

His last visit was in January, 2016, just one month after I began my position at Valhalla. As you could imagine his clinics fill up quickly and at that time I was not able to get a spot with Quest. Over the course of the four day clinic I watched as much as I could and was inspired to have a space with my name on it for his next visit.

On Friday, July 29th my time to ride with Herwig finally came and it was well worth the wait! Now, the mistake I wont make next time is to only book one lesson!

At an age of only 15 years Herwig Radnetter began his career with the Spanish Riding School – to this day he states without hesitation that he has “the greatest job in the world“. In 1988 he was promoted to the rank of a Rider, and in June 2012 he became responsible for the administrative management of the equestrian team. Upon his return to Austria this week he will be celebrating 40 years at the Spanish Riding School.

ABOUT THE SPANISH RIDING SCHOOL

The Spanish Riding School in Vienna is the only institution in the world which has practiced for more than 450 years and continues to cultivate classical equitation in the Renaissance tradition of the Haute Ecole – which can also be found on UNESCO’s list of intangible cultural heritage of humanity.

The School takes the “Spanish” part of its name from the horses which originated from the Iberian Peninsula during the 16th century and which were considered especially noble, spirited, willing and suited for the art of classical horsemanship. Today’s Lipizzaner stallions are the descendants of this proud Spanish breed, a cross between Spanish, Arabian and Berber horses.

In 1729 Emperor Charles VI commissioned the architect Josef Emanuel Fischer von Erlach to build the magnificent Winter Riding School in the Hofburg Palace; it was completed in 1735. A portrait of the monarch graces the splendid baroque hall in which the riders of the Spanish Riding School train their Lipizzaner stallions and show off their skills to an international audience during the public performances.

Coming out of that 45 minute session I was tired, elated, frustrated and encouraged all at the same time.

I was tired because the breaks are few and far between with Herwig. Also, 99.9% of the trot work was done sitting and my abs were screaming at me.

I was elated because I was able to feel some really harmonious moments with Quest. The quality of his “through-ness”, self carriage and rhythm in all three gaits became notably improved. Once he was in this self sustaining zone I could then focus on my own position and technique.

I was frustrated because my struggle with a particular lead change persisted through to the end of our session. Since I began playing with the Flying lead changes on Quest I have consistently had trouble changing from left to right. He is generally late behind, or, brings both hind legs together. Hopping like a bunny. This has created moments of self doubt for me.

Maybe I have terrible timing.
Maybe I will never be able to feel the right millisecond in which to ask for the change. Maybe this will hold us back from moving up the levels.

I was encouraged after the session to hear from Herwig that I am asking/cuing correctly and in the correct timing. It is just a strength/habit issue with Quest and something that will continue to take patience and and diligence. Despite my complaining we did have a few super “through” changes from left to right and Jerome managed to catch this one on camera!

I was encouraged because everything I heard sounded very familiar. The principles Herwig emphasized and held me accountable to were 100% aligned with my roots in Parelli Natural Horsemanship. I am continually encouraged that my mission to bridge the two worlds will indeed become a reality. I have so much faith that dressage and natural horsemanship are destined to be a life long romance – once they can look past one another’s quirks – accepting the imperfections, they will see how complimentary they can be, creating a dynamite team.

HERE were my three main takeaways:

1) Release my pelvis in the sitting trot

I need to be mindful that I do not lock my pelvis in the sitting trot. I need to not only allowbut expect that Quest uses his back, naturally open and close my hip angle.

2) When aiding the horse do as little as possible

“Start by requesting with the most subtle aid possible. If he doesn’t respond then only go up one notch from there. Repeat only one notch up until he give you the response you are looking for.”

Natural Horsemanship Parallels: “Be as soft as possible but as firm as necessary” “Trust that the horse will respond but be ready to correct” When playing with the tempi changes Herwig encouraged me to use my existing outside leg to create a “pre-cue” and let Quest know I was about to swap the position of my legs. thus asking for a flying lead change. As I was coming down my line of changes I could hear him say in a stacatto-string of words “and-pre/pare-to-CHANGE”.

Natural Horsemanship Parallels: Continue to be consistent with your phases until the horse learns “what happens before what happens happens”

To celebrate our five year wedding anniversary Jerome and I have been planning a trip to Switzerland this December. We had discussed the idea of venturing over to Austria while we were there. After getting to know Herwig over several dinners we are definitely adding Vienna and the Spanish Riding School to our itinerary!